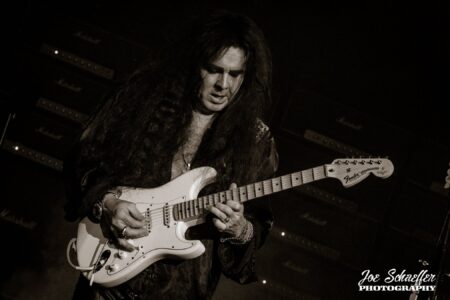 Soto was in attendance at Malmsteen‘s gig at the Canyon Club in Agoura Hills, California, USA on May 19, 2022 and posted on social media the next morning that he was apparently asked to leave failing which Malmsteen would not be playing that night. The following message was posted on Soto‘s Facebook page earlier today:

“Hey my peeps, here’s a fun little diddy for ya! I went to the Canyon Club tonight, my local watering hole for the past 21 years, it’s like my Cheers where everybody knows my name…I actually went to see one of the support bands who were killer btw, I hesitated on going because my former ahem ‘boss’ was headlining but I was not planning to stay anyway…well, word got to him I was in the house and I was kindly told as long as I am present, the show would be cancelled… Now I’ve seen it all!

I left as planned but it’s kind of funny, I just had to share the ludicrousness (not a real word but seems to fit the detail) that continues in 2022, I laughed all the way home! I’m sure this will be shared like crazy but I couldn’t help but sharing it with you all, good times!”

This apparently prompted Malmsteen to fire back on social media with the following message on his Facebook page earlier today (after Soto‘s Facebook post was first published):

“Hmmmm…. I think some people are making up stories to be in the media again

Kids, don’t believe made up BS from people who are trying to stay relevant!

He’s not important for me to cancel my show to my fans. On the other hand I was told by my agent that he snuck in there without paying so the security threw him out

Certain people make up stories… turn up at my show, get kicked out by security because they snuck in the venue WITHOUT PAYING, then turn around make up a story to try and grab media attention… some people are sick. STOP stalking me and get help