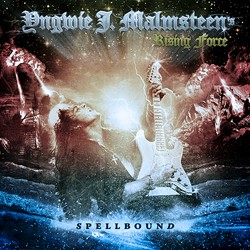 Not only does Malmsteen produce some of the most extreme neo-classical guitar compositions, but he is also delivering the lead vocals as well as the other instruments on ‘Spellbound’. Included as well are some turbo-charged bluesy stuff to boot… ‘Spellbound’ indeed.

Malmsteen also has plans to release an autobiography called ‘Relentless’ in early 2013 containing the only ‘real and true’ story of the guitarist, written by Malmsteen himself. More information can be found at www.YngwieMalmsteen.com.

Yngwie Malmsteen is one of rock’s premiere virtuoso guitarists. Yngwie has dominated the world of solo guitar for two decades. When he was barely 20, Yngwie exploded onto the music scene with his jaw-dropping technique of lightning fast harmonic minor scalar riffing.

His 1984 album, ‘Yngwie J. Malmsteen’s Rising Force’, established seemingly overnight the style now referred to a neo-classical melodic rock. A legend in both style and technique, Yngwie’s long career reached new heights when his totally classical work for orchestra and solo electric guitar, ‘Concerto Suite’, was released, proving that his classical credentials were genuine. A respected musician among both his peers and his fans, Yngwie continues to play and compose at a level of mastery that many career musicians only dream of.