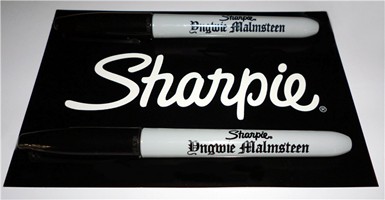 Forget the charting albums and a style that has influenced many, Swedish guitarist Yngwie Malmsteen hasn’t known real success until now… with his name on personalized Sharpie markers.

Sharpie president Ben J. Gadbois not only did the honors, he had this to say, “I have followed Yngwie since high school and am a huge fan. It was fantastic to meet one of the greatest guitar players of all time and talk about music and several of our common interests. It was also an honor to present Yngwie with his own personalized Sharpies. It means a lot that he chooses our markers to sign autographs. He’s definitely made an indelible mark on music, and in some small way, we hope Sharpie has helped him make a lasting impressions with his fans.”

Yngwie Malmsteen is one of rock’s premiere virtuoso guitarists and has dominated the world of solo guitar for two decades. When he was barely 20, Yngwie exploded onto the music scene with his jaw-dropping technique of lightning fast harmonic minor scalar riffing.

His 1984 album, ‘Yngwie J. Malmsteen’s Rising Force’, established seemingly overnight the style now referred to a neo-classical melodic rock. A legend in both style and technique, Yngwie’s long career reached new heights when his totally classical work for orchestra and solo electric guitar, ‘Concerto Suite’, was released, proving that his classical credentials were genuine. A respected musician among both his peers and his fans, Yngwie continues to play and compose at a level of mastery that many career musician only dream of.