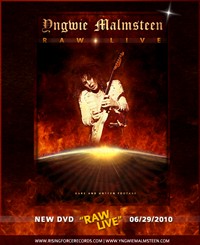 Yngwie Malmsteen’s new DVD ‘Raw Live’ will be released on June 29th. ‘Raw Live’ provides an unprecedented and unique look at the rise of a guitar god.

Spanning from 1981 through 1999 and encompassing extremely rare footage of Yngwie Malmsteen’s early years in Sweden, this video displays the infancy of Yngwie’s prodigious skills well prior to his first worldwide album and travels through Yngwie’s masterful career, including his masterful performances from his first solo albums, Rising Force, Marching Out, and Trilogy.

Also included in this unique video are never released behind the scenes footage of Yngwie and newly shot personal touches of Yngwie which open up the viewer to a side of the guitar maestro which is rarely seen by the public.

Order yours today at Amazon.com