Meniketti was asked about being part of Hear ‘N Aid project (released in January 1986) to which he stated: “An amazing time was had by all, is probably what most would say about that evening at A&M Studios. Seeing all our friends in the industry and the 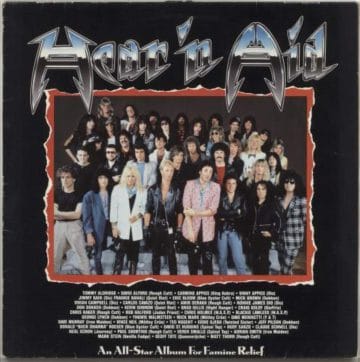 craziness of packed hallways with rockers and press was a night to remember. And of course, the main reason we were there, to make a record to help others; and also working with Ronnie Dio – it was all very memorable. Ronnie had control over a rowdy bunch or rockers, settling everyone down to get the background vocal track. This was no easy feat.  After the background vocals were finished they started on lead guitar solos while most everyone was still hanging out in the hallways talking to each other and to the press. I went in to the control room, along with a few other guitarists, to watch Yngwie perform his solo, and after that, the night went on forever for most of us.

The next morning I was pretty much alone to sing the entire song along with vocal improvising at the end. Only Ronnie, his two engineers, a small video crew, Neil Schon, and Rob Halford were there. Rob was in the hallway waiting to sing after I was finished. It was a fun song to sing lead over, even though it was early in the morning. I was initially a little nervous to sing while Ronnie Dio was producing it, but it all turned out very well.”

You can read the interview with Dave Meniketti in Portuguese at Marcelo Vieira Music‘s website.