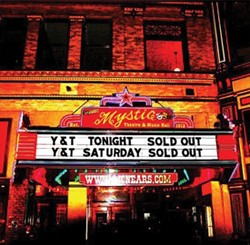 Y&T’s new ‘Live At The Mystic’ CD is now available at store.meniketti.com. This very special direct-to-the-fans two disc set was recorded at one of the most popular venues that Y&T play every year — The Mystic Theatre in Petaluma California — and it marks the very first release with bassist Brad Lang.

This 2-CD set includes 22 songs recorded over two nights in November of 2011, including many songs never before released on any other live Y&T CD. The amazing heat to the tracks showcases the power of the band as it currently sounds. This screams out to be a classic Y&T CD to have in your collection. ‘Live At The Mystic’ is currently available exclusively on the Y&T web site, and will soon be released on iTunes, etc.

In 2010, Y&T released their first studio album in 13 years, featuring original members Dave Meniketti and Phil Kennemore, along with longtime members John Nymann on guitar and Mike Vanderhule on drums, who were each hand-picked by Kennemore and Meniketti years earlier. As the title indicates, ‘Facemelter’ was a hard rockin’, song-oriented album that lived up to its name. Recorded mostly live in the studio, it captured the band’s raw energy and tightness for which they’ve become known.

After a show in the mid-’70s, a rabid fan told the band, “You melted my face.” And as any Y&T fan will testify still today, Y&T’s strong suit lies in their high-energy, power-packed rock ‘n’ roll set.

With Kennemore’s untimely passing from lung cancer, the band carries on the legacy that is Y&T. Y&T continues to tour the world, featuring Dave Meniketti (guitar/lead vocals), John Nymann (guitar/vocals), Brad Lang (bass/vocals), and Mike Vanderhule (drums/vocals), playing songs from ‘Facemelter’ as well as all the hits and fan favorites. Prepare to have your face melted.

For a list of upcoming Y&T tour dates visit www.meniketti.com.