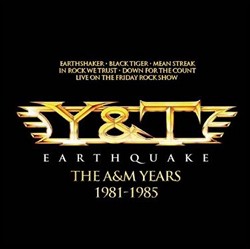 On October 14th Y&T will release a 4CD set called ‘Earthquake: The A&M Years 1981-85’, which features six studio albums with B-sides and a rare Friday Rock Show album featuring their appearances at Reading and Monsters of Rock.

There was a time in the late 1970s/early 1980s when America was seemingly overrun with great hard rock bands. They all had power, individuality and the sheer audacity to ignore trends and go with their instincts. And in this company of lycanthropic lotharios there were none better than Y&T.

The San Francisco based heavy metal act burst on the scene when they were known as Yesterday and Today and recorded two albums for the London label. They were snapped up by A&M and recorded a number of albums for the label including what is regarded as one of the finest metal albums of all time in, ‘Earthshaker’. All of their output for the label is featured on this multipack that also has albums such as ‘Black Tiger’ and ‘Down For The Count’, available in Europe legally for the first time in a number of years.

In 1981 Y&T released the sensational ‘Earthshaker’ album and exploded on the scene with the sort of thoroughbred command that had more in common with the New Wave Of British Heavy Metal than the smoother and more mainstream attitudes starting to invade and pervade in the States. When you listen the flood of riffs which are the hallmark of this album, it’s just irresistible. From the opening shards of “Hungry For Rock” through the titanic “Rescue Me” and onwards to the stormy “Hurricane” and finally to the climactic, epic “I Believe In You”, this was an album that had not one weakness. Each track combined a spontaneity with lively, well crafted ideas. And these were musicians who could live with anyone on the planet. Moreover, topping it all off were the soaraway vocals of Dave Meniketti. One of the great hard rock singers, his voice can both crack concrete, and yet also drips with honeyed nectar. It is capable of sounding innocent and vulnerable, yet quickly turn on its heels and become a roaring savage.

While ‘Earthshaker’ set a benchmark for 1980s American hard rock that few were able to emulate, ‘Black Tiger’, released the following year, was the proof that it was far from being a one-off. The songs on ‘Black Tiger’ were of the highest order. “Open Fire”, “Hell Or High Water”, “Forever”, “Black Tiger” and “My Way Or The Highway” were straight out of the top drawer, and it was no surprise when the album became the first from Y&T to chart in the UK, as it reached number 53.

If ‘Black Tiger’ was the natural successor to ‘Earthshaker’, then ‘Mean Streak’ in 1983 proved to be equally invaluable. Produced by Chris Tsangarides, a lot of the songs on this album have become staples of the band’s live set through the years. These include the title track, “Midnight In Tokyo”, “Hang ‘Em High” and “Down And Dirty”. ‘Mean Streak’ made it to number 35 in the UK.

But this sniff of success was only the appetizer for what was about to happen. Now, Y&T took a massive leap forward in sales terms, as they elected to go for a more commercial style. The result in 1984 was their biggest album to date, ‘In Rock We Trust’. Working with producer Tom Allom, they sold close to half-a-million copies in America, and reached number 33 in the UK. ‘In Rock We Trust’ features “Rock & Roll’s Gonna Save The World”, “Masters And Slaves”, “Lipstick And Leather” and “(Your Love Is) Drivin’ Me Crazy” — real stompers kissed by the stamp of class.

Things got even more accessible in 1985, when ‘Down For The Count’ hit. Produced by Kevin Beamish, Y&T finally got a successful single in America, as “Summertime Girls” made it to number 55. Bright, breezy and breathtaking, it showed how Y&T were able to embrace the MTV generation, yet also come up with an anthem to appeal to their diehards. Using keyboards for the first time, they also had a battery of other top quality songs to back up “Summertime Girls”. These featured such moments as “Looks Like Trouble”, “Hands Of Time”, “Don’t Tell Me What To Wear”, plus an exquisite cover of Loggins And Messina’s “Your Mama Don’t Dance”.

While they were hauling themselves up to a new level of success during this period of time, the band were still a formidable presence live. They show this on the 1984 live album ‘Open Fire’, which more than lived up to its title, as it brought together a manic montage of their finest songs, all lifted by the added cachet of their stage presence. And they proved equally adept when captured live for the BBC’s ‘Friday Rock Show’, which represents a cross section of the band’s finest accomplishments.

By 1986, drummer Leonard Haze had gone and three years later Stef Burns took over on guitar from Joey Alves. By 1991, it was all over, and the band split up. Yes, they did return in 1995, and continue to this day in various guises (only Meniketti now remains from the halcyon days). But when you want to hear Y&T in their prime — when you wish to get a taste of why they were once regarded as one of the world’s greatest hard rock bands… well, the music on these four CDs is all you need. It represents the glory age for a glorious band.