Y&T featuring lone original member and frontman Dave Meniketti will be releasing their much anticipated documentary titled On With The Show – The Documentary via DVD on November 26, 2019 and via Blu-Ray on December 31, 2019 after a very successful Kickstarter campaign. 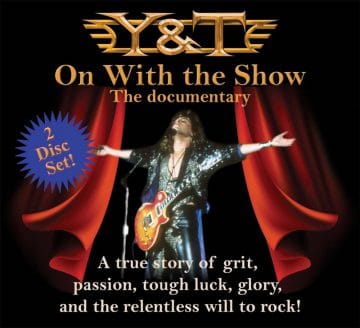 Y&T‘s merchandise website indicates the following about the documentary:

Y&T “On With the Show” Documentary. 2 disc set including the actual documentary (143 minutes) with 8 deleted scene bonus material, plus an “Encore” disc (137 minutes) with 9 special featurettes – for a total of nearly 5 hours of material. Available in DVD. (Blu-Ray coming soon.)

Please note: The DVD was manufactured as ALL REGIONS so it should play in your DVD player; if you encounter any issues in your country or with your player (older DVD players may pose problems), then you can watch it on a computer, which is not region-specific.”

Y&T‘s On With The Show – The Documentary trailer:

Y&T: On With the Show Documentary Trailer

Official* trailer for the documentary “Y&T: On With the Show” releasing November 26, 2019.Available on DVD & Blu-ray at https://www.YandTRocks.comAvailable …