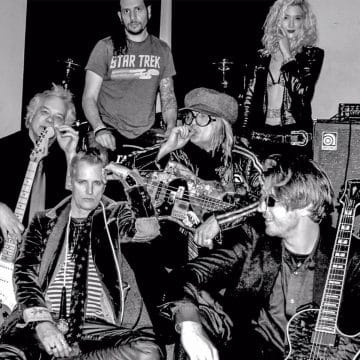 Back in early August 2016, Zen From Mars released a video for their song “New Leaf.”

Sleaze Roxx had the opportunity to interview Fortier back in mid-August 2016 who commented on various Zen From Mars songs including “Aflame”: “Each song is so different from one another. What each member brings to the table is absolutely amazing. It works so perfect. “New Leaf” is a big rock song with a positive message. It’s a great track. But diving into the other material that we have… it gives me chills. I love it. We have a song called “Aflame” that sounds like if Wicked Game by Chris Isaak made love to the music of “Waterfalls” by TLC while Type O Negative watches [laughs]. Another song we have, that you might be hearing sooner than you think… it’s called “Inner Mission.” It’s absolutely crushing. Definitely Rammstein meets Black Sabbath. We also have this song called “Poppy” that’s just this other worldly power pop song. All these songs paint a glorious picture together. It’s all a part of “The Ultra Head Frequency”.”