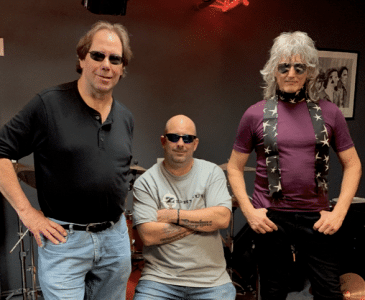 New York rockers Zephyrus consisting of Bobby Berlingeri on lead vocals and guitar, Joe Morris on bass and new drummer Will Dzvonar will be celebrating their 40th year anniversary in 2020.

“Zephyrus will be celebrating our 40th year anniversary together in 2020 and playing our first show on Thursday, January 16th at Revolution in Amityville, New York [USA] with Adam & The Metal Hawks and Bad Angel. This will be our first show with our new drummer Will Dzvonar who joined Zephyrus back in August of 2019 after an extensive eight month search. We started the band back in 1980 and Bobby Berlingeri on vocals and guitar, and myself on bass, are the only remaining original members. We play all original hard rock music and already have more shows booked throughout the rest of the year.”

Back on August 11, 2018, the original Zephyrus band line-up consisting of Berlingeri, Morris and drummer Charles Held reunited for the first time in 25 years for a show at Katie’s in Smithtown, New York, USA.