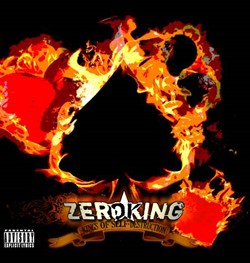 Zeroking Set On Self Destruction With New Album

Equal parts classic metal ala Guns N’ Roses and Motley Crue and modern hard rock in the vein of Hinder and Buckcherry, ‘Kings Of Self Destruction’ covers all the bases. Kicking off with the slamming, “Dead Rockstar”, the band tears through an hour’s worth of material including the hook laden first single “Stone Cold Bitch”, the southern rock flavoured “Southern Lady X Godiva”, the pop oriented “Love Is Dead” (which features Stacee Lawson on a duet) and the melancholic “Valentine.”

13 songs in total, the digital version of ‘Kings Of Self Destruction’ also features an additional three bonus tracks.

“The album really takes the listener on a journey through a wide range of emotions,” says Zeroking frontman Andy Haught. “A lot happened in all our lives during the writing process ranging from divorces to the band literally self destructing, but in the end we had a strong batch of songs that rock really hard yet show our wide spectrum of influences.”

Formed in 2005, Zeroking has become a top drawing act in the Mid-Atlantic region, sharing the stage with the likes of Anthrax, Twisted Sister, Bobaflex, Dope, Black Stone Cherry and many, many other acts. The band released an EP, ‘Sweet Sale Of Excess’, in 2006 to critical and fan praise. Entering the studio in the summer of 2009, they began work on ‘Kings Of Self Destruction’ with producer Steve Riley.

‘Kings Of Self Destruction’ is in stores and can be found on iTunes at itunes.apple.com/us/album/kings-of-self-destruction/id502939415. Zeroking can be found at www.facebook.com/Zerokingfans.