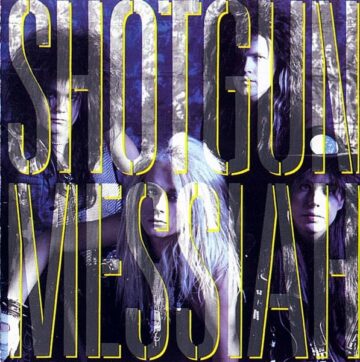 In terms of what led to his departure from Shotgun Messiah, Zan explained (with slight edits): “Well, it was a lot of different things, to be honest. First of all, these guys knew each other since day one, because they came from this small town in Sweden and had known each other all of their lives. I came into their world, we moved to LA, and so on. Tim and Harry were tight, of course, and they wrote songs. But then, Harry and I started writing songs, and it became a little tense between me and Tim, I would say. And at the same time, we figured out we had different ways of living. I have no regrets, but I was the one that loved to be out and have a good time; but at the same time, I had a very high work ethic.

But they thought, “Well, you’re hanging with Billy Idol, this and that. We don’t need anyone.” That’s because I’m very outgoing and they weren’t. So, that kind of tension grew. We were too young, everything was too corrupted And to be honest, I believe that right when that started, Tim already had his aim to be a singer in the band because he was never too happy being the bass player in Shotgun Messiah. He was absolutely happy with the album; he was absolutely happy touring together as a band. But the thing is, as you may know, who’s got the most attention in the band? Well, it’s the singer and the guitar player — especially if you’re as good as Harry K. Cody is. So, [Tim] came third, and he was one of the guys that started the band. Of course, he would not get on Harry on this, so he would get on me.”

With respect to when was the last time he spoke to Skold, Zan revealed: “You’re not gonna believe this…1990. Stixx, I have played with many times. Stixx and I talk frequently. I spoke to Harry yesterday. Tim? 1990.

DiCecco pointed out that it was safe to say the original Shotgun Messiah line-up wouldn’t be among the bands from that era that reunite for a handful of shows, to which Zan noted: “To be honest, it was pretty close two-and-a-half years ago. Two-and-a-half years ago, they were asking about the band here in Europe for festivals. Big festivals. And quite big money, to be honest. So, Harry, who is in touch with me, called me. And I said, “Absolutely we can do that. And let’s do it like this; let’s make the first half-hour with me as the singer and Tim as the bass player, and then you make the next half hour or an hour with the stuff you did on Violent New Breed, and Second Coming with Tim.” So, I said, “You do two-thirds, and we’ll do the original first.” And Harry thought that was a splendid idea. First, he said that Tim was on it, as well. Then all of a sudden, I hear that now Tim was saying that his manager didn’t allow it … “No, Zinny you can come up for two songs, being a guest.” Then I said, “I will not come up as a guest in a band that I was an original in. So, let’s be fair. Let me do at least five or six songs from the first album, and then you can do the rest, so they get the original as well, because that’s what they are paying for.”

But then Harry said, “I’m so sorry, Zinny, but it ain’t gonna happen because Tim‘s manager doesn’t want it.” And then I saw on Instagram later on that Tim said, “It will be when hell freezes over that I play with Zinny.” We were young — but in some way, I don’t know if he feels hurt or anything — but in interviews, I’ve always said that he’s an absolutely talented guy. You know, he’s been playing with Marilyn Manson and toured with him for six years. But still, I don’t know, some kind of grudge with me; I don’t know what it is. So, we were ready to go, and I knew the songs already because I did have a revival thing with Stixx called Shotgun. We played some festivals back in 2014 and 2015 with Shotgun Messiah’s first album. So, I was already up to date with it, so to speak. But that’s what it came down to; Tim blew off that thing.”

You can read the rest of the interview with Zinny Zan at Vinyl Writer Music‘s website.