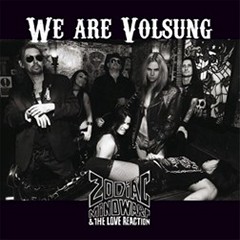 They were the prime mover, they preached back seat education, together with Alice Cooper they fed Frankenstein… now they are back… meaner, leaner and heavier than ever. Zodiac Mindwarp & The Love Reaction, SPV Records and Sleaze Roxx have teamed up to bring you the premiere of “Stark Von Oben”, the opening track from the band’s brand new CD ‘We Are Volsung’.

Inspired by the northern mythology, ‘We Are Volsung’ features 10 brand new unadulterated songs. While talking about the new CD with Sleaze Roxx — https://sleazeroxx.com/interviews/zodiac-mindwarp-interview/ — ‘Zed’ said, “What is God anyway? I was thinking maybe, he’s not like this Christian God. Then I discovered the Norse God Odin and I was thinking, you know, I kind of like that guy much better than the Christian one. He’s like more fun and that was it really. It took off from there and I bought all these books about Norse mythology. I said these guys are really rocking — like Thor, Vali and Loki. You know this is like a fun religion. They are kind of like the Greek Gods in the way they are human and they are fallible instead of the Christian Gods were all these saints, walking around with halos over their heads and never fart or shit or do anything wrong (laughs).

The inspiration came from me and Bill Drummond just sitting around thinking about it. That is where it came from and it just spiraled out of control and we ended up with a bleedin’ album. A fucking concept album, and I couldn’t even do half of it… it’s half a concept (laughs).”

SPV/Steamhammer is very proud to have the band on board for a journey to Valhalla and back. The album wwas released in Germany on September 24th, in Europe on September 27th and in the USA on September 28th followed by a European tour in October and an US tour in November.

1985: In a musical World of hairspray and spandex, two long haired leather clad rockers were introduced to each other by their “exotic dancer” girlfriends. One, a graphic artist and poet, the other, a budding philosopher. They immediately dropped everything, joined forces and created the dirtiest, wildest band of all time. One year later, they signed to Polygram, released, first the ground breaking High Priest of Love EP, and subsequently the Tattooed Beat Messiah album, containing the well received single Prime Mover. Overnight, they accidentally changed the look of all the rock bands of the time from the obligatory spandex, eye liner and tinsel, to rough biker jackets, Engineer boots and goatee beards. Motley Crue declared them to be their favourite band and immediately restyled themselves for the Girls, Girls, Girls record. ZMATLR grew in notoriety, touring the World and America, co-headlining arenas and theatres with Guns ‘N’ Roses and finding themselves at home playing festivals and baseball stadiums with Iron Maiden. After attending a Hammersmith Odeon ZMATLR concert and giving it his seal of approval, Alice Cooper then recorded the Zodiac Mindwarp penned Feed My Frankenstein, later performed in the film Wayne’s World. The critical acclaim of ZMATLR then caused rare misfortune, when they lost their young naive bass player to the lures of The Cult. The band soldiered on regardless. Sometime later, in Paris, Slam Thunderhide, their drummer decided to put down his sticks to become a GoGo dancer in Vancouver.

Present day: With “The Cat” shaking the Earth on Drums and “Jack Shitt” rumbling the low frequencies, they ride again, honing their skills playing for the Viking descendants in Scandinavia. From these tough, manly ordeals, a new set of recordings have been forged. “We Are Volsung” is the result, a celebration in the Norse tradition. 10 Songs of pure unadulterated rock.

Courtesy of www.sleazeroxx.com and www.spv.de